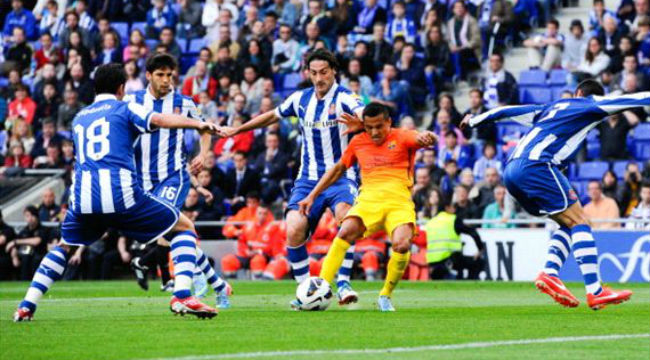 Tito Vilanova’s side were already guaranteed to regain their league crown heading into match day 37, and the derby success puts them 15 points clear of Real Madrid, who were held 3-3 by Real Sociedad.

Athletic Bilbao lost the final game to be played at their San Mames stadium as Juanlu’s stoppage-time strike gave Levante all three points in a 1-0 victory.

Atletico Madrid drew 0-0 at home to bottom club Mallorcadespite the presence of free-scoring Colombian Radamel Falcao, who is reported to be on the verge of sealing a huge move to Monaco.

Malaga boss Manuel Pellegrini, who said this week he was leaving at the end of the season and is expected to replace the sacked Roberto Mancini at Manchester City, was given a warm send-off by the home fans at the Rosaleda.

The La Coruna side find themselves in a four-way battle for survival on final day next weekend and are one point above Celta Vigo – who won 2-0 at Real Valladolid – and Real Zaragoza – who were thumped 4-0 at Real Betis. Mallorca’s point in Madrid leaves them in with a shout, two points from safety.

And Osasuna came from behind to win their final home game of the campaign, despatching Sevilla 2-1.